The high school dropout rate among Hispanic students has dropped sharply in the past decade, reaching an all-time low of 10 percent, according to a new Pew Research Center study. 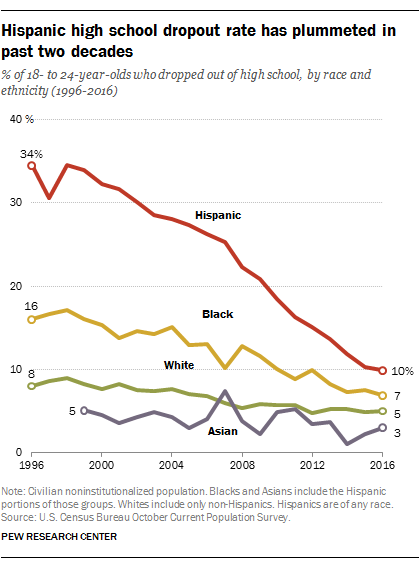 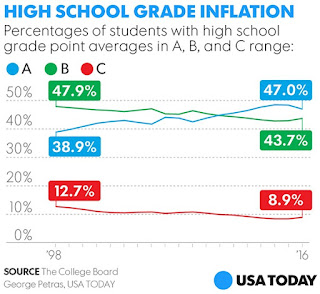 USA Today reports that a study done by Michael Hurwitz, an employee of College Board — the company that gives the SAT — and Jason Lee, shared some suspicious findings recently. The study found that while the number of A’s that high school students are receiving is increasing, the average score on the SAT is going down, leaving the question: What does an A really mean?

The research also incorporated another study that found A’s in college are now three times more prevalent than they were in 1960. 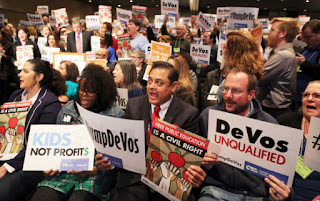 Trump’s education secretary, Betsy DeVos, in written responses to questions from senators, appears to have used several sentences and phrases from other sources without attribution — including from a top Obama Administration civil rights official.

DeVos, a wealthy Republican donor and proponent of "school choice," regularly faces protests across the country. She was recently blocked from entering a school in Washington, D.C.
at 2:01 PM No comments:

Thirteen former and current principals within the Detroit Public School (DPS) district have been charged by federal officials with engaging in a long-running kickback and bribery scheme. Beginning in 2002 and continuing until January 2015, the scheme involved business with DPS worth about $2.7 million, according to the U.S. Attorney’s Office.

The principals, all of whom were charged separately, are alleged to have submitted fraudulent school supply invoices to the district in return for payments.

Among the defendants is Spain Elementary-Middle School principal, Ronald Alexander. His school was showcased on The Ellen Show last month when Ellen surprised him with a $500,000 donation.

The bribery and tax evasion charges come amidst word that Detroit’s schools are drowning under $3.5 billion of debt.

"The actions of these individuals are reprehensible and represent a breach of the public trust," said Steven Rhodes, a judge recently appointed to run Detroit Public Schools. 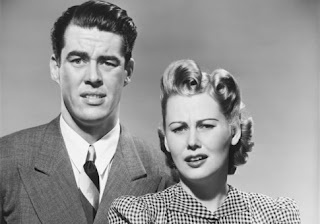 A bill is now being pushed through the Mississippi legislature that proposes teachers grade parents. The Parent Involvement and Accountability Act would require teachers to grade parents’ involvement with their children’s education. Parents would be graded on three metrics: parental response to requests for conferences or communication; the student’s completion of homework and preparation for tests; the frequency of the student’s absence and tardiness.
at 3:43 PM No comments:

Some parents of Pittsburgh's Gateway High School students were troubled after hearing how the school conducted its "Diversity Day" event. 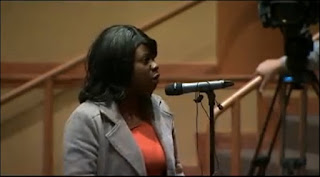 Those who attended the emergency meeting demanded to know who composed and sent out emails and a Facebook post this week after an out-of-school fight broke out Tuesday at a local park. The post, which has since been deleted, called for a "Diversity Day." Students were told to wear Gateway High shirts and "Black Lives Matter" shirts for the pre-planned event. Parents said Friday that the post on an official district account added racial tension to what was originally a nonpolitical, juvenile dispute.

at 11:49 AM No comments:
Older Posts Home
Subscribe to: Posts (Atom)

"If we teach today like we taught yesterday, we rob our children of tomorrow."
-- John Dewey 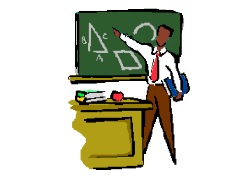 "The principle goal of education is to create men and women who are capable of doing new things, not simply repeating what other generations have done."
-- Jean Piaget


Whatever you can
conceive and believe,
you can achieve.

in the Digital City Classroom